Michael Wayne Daniel was born to Mr. and Mrs. Lonnie B. Daniel on the 23rd of January, 1945, in Baton Rouge, LA.  He was richly blessed with a happy childhood which included Boy Scouts, Royal Ambassadors, piano lessons, school band, church twice every Sunday plus Wednesday nights in summer.  The 40s and 50s were a wonderful time for children.

Wayne graduated from Central High School in Jackson, Mississippi in 1963, and the following year he married his high school sweetheart, Mary Lilly Murphy, and enlisted in the US Army.  Together Wayne and Mary raised two wonderful children, a daughter Chris and a son, Michael, who blessed them with 7 grandchildren and 4 great-grands.

Although he began military service as a private in the infantry, he rapidly progressed into the officer ranks as a helicopter and airplane pilot, serving two years in Vietnam, where he received the Bronze Star and 29 Air Medals.  He retired from active duty in 1984 with the rank of Major.

Wayne’s eyes and heart were opened to God’s call to active duty in 1989 when God called Him to preach.  After spending one month in Kenya on a short-term mission trip, he and Mary both knew God was calling them to Kenya full-time.  The following summer they served together on the same field and in 1991 established a permanent new home in Meru, Kenya, working with street children, orphans and destitute children.  In January of 1992, they took in their first child, which began a rapid growth that resulted in supporting over sixty children in just that first year.

In 1996, they founded African Children’s Mission and established the mission headquarters in rural Uganda to continue the work in Uganda and Kenya East Africa, feeding and educating thousands of precious, needy children.

In December 2016, the couple retired and moved back home to the US and established a home in Alabaster, AL.  They continued to do short-term mission trips back to East Africa once or twice every year working with African Children’s Mission.

A Celebration of Life will be held on Sunday, August 18, at Hunter Street Baptist Church, Hoover, AL, with visitation starting at 1:00 p.m. and a memorial service at 2:00 p.m.  Military Honors and burial will be on Monday, August 19, in the Alabama National Cemetery, Montevallo, AL at 9:30 a.m. 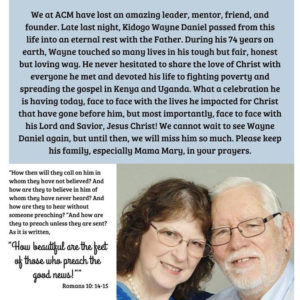 University of Nebraska at Omaha

University of Tennessee at Martin

Awards:  Scouting Eagle Scout, Vigil Member of the Order of the Arrow