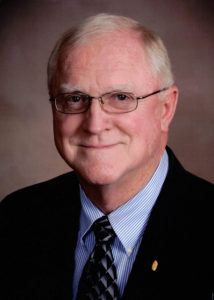 Major Billy R. Woodard, retired, US Army, of Helena, Alabama, died peacefully at his home on August 29, 2018 surrounded by his family. Born in Atkinson County, Georgia on September 18, 1943, he was the son of the late Jimmie Thomas Woodard and Fronna Ruth (Corbitt). He was raised and educated in Jacksonville, Florida. Following graduation, he entered the Foreign National Guard while working in management for a local grocery chain. He then enlisted in the US Army assigned to the Nike-Hercules missile site in Byron, Georgia.  He applied for Officer Candidate School (OCS) while at Byron.  Following completion of OCS training he was assigned as a Weapons Instructor at Ft. Benning, Georgia.  He proudly served two tours of duty for his country during the Vietnam War as a part of the 199th Light Infantry Brigade earning two Bronze Stars. He later completed Advanced Infantry Officer courses at Ft. Hood, Texas before serving in the 3rd Armored Division in Germany. He retired in Birmingham, Alabama while serving as Advisor for the Combat Exercise Division for the 87th Maneuver Area Command.  This is where he met his beloved late wife Kay (Roper).  Following his retirement from the US Army, he worked for and retired from the US Postal Service.  He was very active at Mt. Chapel United Methodist Church.  A very compassionate person, he volunteered countless hours raising monies for the church’s Costa Rica Mission Fund to aid in the communities they served. He was an avid hunter and outdoorsman and was always prepared for any situation.  For the many that Bill worked and served with, he will be remembered for his dedication.  He was preceded in death by his wife, Kay and brother, Bobby Woodard.  Survivors include:  cherished sister, Bonnie Fair (Crawford); loving father to Al Schlosser (Cathy) and Beth Williams (Chris); and the best “Grand” to Marie and Samantha Williams.  He truly loved and cared about his many nieces, nephews and great nieces and great nephews.  The funeral service will be held on Wednesday, September 5, 2018 at Mt. Chapel United Methodist Church in Vestavia Hills.  Tyler Christiansen officiating.  Visitation will begin at 9:00 a.m. and service at 10:00 a.m.  Interment will be in the Alabama National Cemetery in Montevallo, Alabama at 12:30 p.m.  All are invited to attend his military send off.  The family would like to send a special thanks to his caretaker Kelly Marcus and to Hope Hospice and the incredible nurses that cared for him:  Carla, Kristine, Susan and Samantha.  In lieu of flowers, the family requests any donations be sent in his memory to: