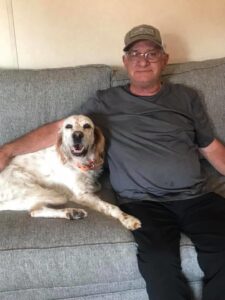 Patric Moriarty, age 70, passed away peacefully at home in the loving care of his family on July 18, 2020. Pat was born December 22, 1949 in Pontiac Michigan but spent his childhood on the banks of the Cass River in Caro where he did his best to thin the fish population.  He graduated from Caro High School in 1968 where he set state records for pole vaultings and local notoriety for fun and shenanigans.

Pat was drafted into the military in 1969 where he served in the United States Airforce in Germany during the Vietnam war. He volunteered for active duty but was told “we have enough problems over there”. After the war he moved to Petoskey Mi. where he met and then married his beautiful wife Leanne (McGarey). Pat and Leanne raised two beautiful daughters who remain devoted to their father’s memory. Pat worked for Thercom Holddings, Southern Research Institute and most recently University of Alabama Birmingham where he developed “sensitivity training” for the students and oversaw the development composite plastics.

Pat will be remembered by his friends and family for his love of hunting and fishing, incredible sense of humor and storytelling with the innate ability to pull the wool over your eyes.  But the thing that will remembered most about Pat is his love of his family. His world revolved around caring and providing for his wife, children and grandchildren.

Friends are welcome to join the family for a Celebration of Life which will be held on Thursday July 23rd at the home of Wesley and Tiffany Seale  (119 Fawn Meadows Ln., Wilsonville) from 6pm to 8pm were Pat will be remembered over copious servings of his favorite Blue Bell ice cream. A Celebration of Life for Michigan Friends and Family will be held at a later date.