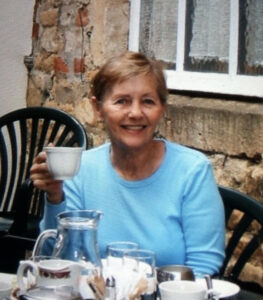 Corinne Lois Davis ( Reakoff ) went to be with our Lord on  December 31, 2020, after a lengthy struggle with dementia and  added effects of Covid-19. She was 83. A native of Detroit, MI, she  moved to Birmingham, AL for the second half of her life to lend a  hand to family. Her first job was at Sanders Confectioner’s flagship  store in Detroit, where folks would stand three-deep to get a seat  at the counter. Corinne was heralded as making the best oatmeal  there. She’s kept a jar of their milk chocolate hot fudge on hand  ever since.  Everyone found her sweet and kind with almost a  naïve disposition. She was funny too, and smart. As a single  mother with 3 kids, she put herself through nursing school while  sometimes working 2 or 3 part time jobs — hard ones, like sewing  seatbelts on an assembly line in a hot factory. Somehow, she still  found time to make homemade bread regularly, cook real dinners  every night, bake bunny cakes at Easter and make the inevitable  Halloween costumes. All the while she maintained her  composure, trusted God and taught her kids things like “Don’t  worry, it will work out,” and “Don’t say why me? Say why not  me?”.  She faced everything with positive determination. She  bandaged the whole neighborhood’s knees and hearts and all her  children’s friends called her “Ma.” As a nurse, she worked many  years at Holy Cross Hospital in Detroit. Her co-worker girlfriends  there were her sustenance. Most notably, she navigated the  world with empathy and paid special attention to patients’ needs  for privacy and respect. Nursing meant being certain to draw the  curtain before bathing a patient- even if they were sedated on a  ventilator or keeping a patient’s meal hot for them if they were  gone for a test when it arrived.  When her eldest daughter was in  medical school, a single mother herself, “ Grammy “ would take  her grandchildren for the weekend so her daughter could study.  On Sundays she’d bring them back with clothes all washed and  folded and a meatloaf for their dinner packed. She intuitively  knew what people needed and thought of others first. Corinne

loved traveling with her sister Treesha, her very best friend. Those  two would take off, often with little kids in tow, eating cheese  whiz sandwiches in the car or whatever it took to make a trip  possible — out west for a frontier adventure, panning for gold or  the wilds of Alaska. She loved to have fun and she loved her  family. She exposed her kids to a wide variety of beautiful places  and experiences. Just being with her taught them so much. She  was a gardener, an artist, a gifted seamstress, animal lover and  notable cook who earned the title “Pie Babe” for her legendary  desserts. She would wallpaper your bathroom if you needed it. She lived the Golden Rule. Her son had said when he was unsure  of what to do, he’d ask himself “ what would Mom do ?”. The kindness and love she must have shown to others in so many  small, unseen, faithful places may be the seeds God uses to bring  people closer to Himself. We know she’s hearing “ well done,  good and faithful servant’.

She is being buried at a private family graveside service. Due to  Covid limitations, a memorial service and celebration of life will be  held at a later date. In lieu of flowers, the family is encouraging

donations to the Greater Birmingham Humane Society in her  memory. https://gbhs.org