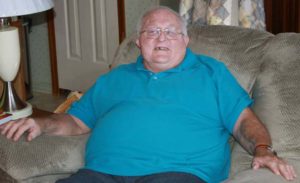 Kenny was born in the Camp Branch community and spent his life living in the Saginaw area. He was a butcher by trade beginning at the young age of 15 until his retirement at 65. His greatest strengths were his selflessness and the love he showed to all people. He will be remembered for his incredible ability to encourage others as well as his wit and humor. More importantly, Kenny was known for his love of his Lord and never came in contact with anyone with whom he did share his love for the Lord. Kenny taught Sunday School for the majority of his adult life. He and Gayle are members of the Branch at Mission Hills Church.

Kenny will be loved and missed by many friends, especially his friend from childhood, Greg Roach.

The funeral service will be held at Charter Funeral Home on Thursday, March 8. Family visitation will be at 1:00 PM, friends will be received from 1:30-2:30, with service following. Interment will follow at Nabors Cemetery.

A special thanks to New Beacon Hospice for their professional and loving care during this difficult time.