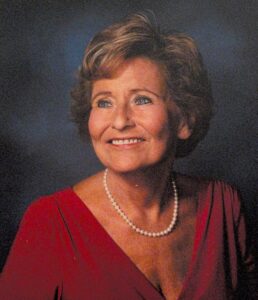 Dorothy Louise Downs Schroeder “Deegee”, 77 of Calera, Alabama, died November 5, 2021.  She was a lifelong resident of Calera, having moved there as a child when her father assumed his role at Central State Bank.  She was born November 2, 1944, in Birmingham to Elizabeth Parker Downs and Roy R. Downs, both of whom predeceased her.  Her brother, David Parker Downs and his wife Kay also preceded her.

Deegee, as she was affectionately known, graduated from Calera High School in 1962.  She was very popular and quite involved in all activities and school projects.  For example, she served as a cheerleader and a member of the band.  Deegee attended Stephens College in Columbia, Missouri, for two years.  She then went to the University of Alabama from which she graduated.  It was at Alabama that she met William Milton Schroeder whom she married in 1965.

They settled in Calera where Deegee taught third grade and Bill began his banking career.  Their first child, Shane Downs Schroeder, was born in 1968.  He was followed by his sister Shanda Dee Schroeder and brother William Milton Schroeder (“Mitt”).  Deegee was quite proud that all three children were actively involved in the bank.

Deegee’s community activities included various civic and charitable causes having followed the excellent example of her father.  As chairman of the library board, she was instrumental in the building of the Roy Downs Memorial Library.  Deegee was an avid Crimson Tide fan, attending many games and being active in the alumni association.  Her church was very important to her and included playing the piano and organ as well as singing in the choir.  In recent years she placed her love and attention with Shiloh Methodist Church.

When Deegee’s father died in 1971 Deegee and Bill assumed much more active roles in the bank. She served as an officer of the bank and ran the family’s insurance business. After their children were grown and active in the bank, Bill and Deegee spent enjoyable times at their home in Sandestin, Florida.

In recent years Deegee’s health necessitated that she reduce her activities, but she always had time for her family, especially her grandchildren. She was an excellent cook and continued to prepare family meals when she could.  She crafted beautiful needlework and enjoyed solving crossword puzzles. She shopped for Christmas all year long.  She cherished her friendships not only close to home, but across the Southeast. One could have had no better friend than Deegee!

The family will receive friends on Tuesday evening from 5-7pm at Calera Baptist Church, 600 Whippoorwill Lane, in Calera. Deegee will be remembered and her life celebrated at 11:00 on Wednesday, November 10th at Calera Baptist Church. In Lieu of flowers, memorials can be made to Calera Community Scholarship Fund, P.O. Box 180, Calera, AL 35040 or your favorite charity.