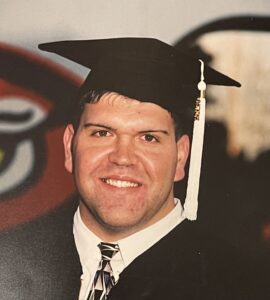 Derek was born in Louisiana and raised in Hoover, Alabama where he graduated from Hoover High School. After high school, he enlisted in the Army where he was stationed in Bosnia. After getting out of the Army, Derek fulfilled his dream of going to Auburn University and graduated with a degree in Criminal Justice. Upon graduation, he went to work full time at Air Engineers, with co-workers who were like a second family to him.  He loved to travel to places with historical significance, fishing, WWE, playing the drums and of course his Auburn Tigers. War Eagle!

He was preceded in death by his brother, Lee Candler. He is survived by his parents Robert E. Candler (Alice) of Florida and Cathy Candler of Louisiana, his brothers Paul Candler (Darlene) of Louisiana and Rob Candler (Tammy) of Tennessee and a host of other family members and friends.

A celebration of his life will be held on November 16th, 2021 at 6:00 PM at the Charter Funeral Home in Calera, Alabama. Family will greet friends from 4 to 6 PM. In lieu of flowers, please make donations to: St. Jude Children’s Hospital, the American Cancer Society, or Tunnel to Towers Foundation.