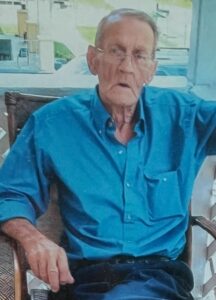 Arthur Earl Lee, age 82, passed away on May 26th at his home in Calera, Alabama.

The couple lived and raised their 5 children in Calera. As a very young man he learned to work hard and took on many jobs to support his family. He worked many years as a Calera police officer then later retired to become a truck driver and worked for Metrock Steel and Wire until he fully retired. He was a loving man to his family, he sometimes came across as a tough and demanding person but only because he loved his family and only wanted the best for us. If he was hard on you I truly believe it was only because he loved you and wanted you to work to your full potential to have a good life and have nice things in life, his pride and joy was his house and yard he worked endless hours to make sure everything and everyone was taken care of. He only wanted his family to work just as hard as he did all the years of his life. He will be greatly missed by all who knew him but he will still be cheering and pushing us along through this life until we met him again in Heaven.

He was preceded in death by his wife, Shirley Lee; his parents, James and Pauline Lee and brother, Herman Lee.